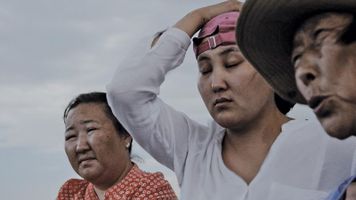 The Ann Arbor Film Festival is thrilled to offer Camp on the Wind’s Road by Nataliya Kharlamova as the newest film in our AAFF PRESENTS series in partnership with The Michigan Theater. Camp on the Wind’s Road will be available to rent on July 8 and will remain available up to August 4. The film is $4.99 or free for AAFF members. You must watch within 30 days of purchase and finish within 48 hours of starting the film. The film tells the story of Belekmma who, following the death of her father, lodges herself in her sheepherder’s encampment while she awaits the moment she will see her father's face even if it is just in her dreams. Belekmma awaits this moment up to the day when, according to the Tuvan tradition, the spirit of the deceased would be fed and given ultimate send-off. Nataliya Kharlamova, a Russian native, is a two-time documentarian with an extensive photography portfolio. Kharlamova studied at the Mariana Razbezhkina and Mikhail School of Documentary Film and Theatre and release Camp on the Wind’s Road in 2018 followed by PASTORALE in 2019.