You have to hand it to Paul. He has doggedly led that big band on Monday nights through four venue changes, multiple personnel changes and the vagaries of playing traditional jazz in a pop-oriented music society. And – we all should be exceedingly grateful to Paul Keller for his musical contribution and dedication to our community. He played bass with Diana Krall for years all around the world and was courted by many high-profile leaders asking him to leave Southeastern Michigan. Perhaps it was his desire to bring up his family in this educationally-rich area or his affection for our regional musicians- but whatever the reason, Paul Keller made the decision to stay and we are better for it.

On Thursday morning, I threw my Facebook Page open for comments from jazz fans regarding Paul. Here are a few of the reactions and thoughts:

Lazaro Vega, WBLV jazz radio host from The Blue Lake Fine Arts Camp wrote “Ebullient. Instigator. Deep in the tradition. Always ready”. Betsy Beckerman, bedside musician with the University Of Michigan Gifts of Art Program commented “Wonderful musician, composer, arranger and of course a wonderful human being”. Barbara Kramer, local arts and human services supporter had this story to share about Paul: “Aside from his giant musical talents, as a bassist, arranger and composer, Paul is one of the most generous musicians around. His passion for helping young musicians is boundless. He is always happy to have young 'uns sit in with his band. He opens his PKO gig to middle school, high school and college bands almost every week. He mentors and encourages all of them, as he did with my son, Jesse. He also sets an amazing moral example to all of us about living a good life and treating others well. THANK YOU, Paul for all that you do!” Another community and arts activist Mary Ann Trainor observed “Class act. As popular and sought after as he is, he doesn't seem to mind playing bass in the background of someone else's band. That has always impressed me.” Detroit area jazz presenter Andrew Rothman had high praise for Paul: “Too Marvelous For Words (but I'll try). Musician's musician. A-1. Top flight. First-call. Irrepressible. Go-getter. Generous. Kind. Supportive.” Paul is respected by members of the Detroit Jazz Festival team including Artist Relations Manager Terri Koggenhopp: “Great bassist, great guy to work with and a stand up (no pun intended) guy!” Deb Strong Horn shared her 30-year admiration for Paul Keller “He's one of my very oldest friends! We met around 1980 at a jazz club in Grand Rapids, The Biermeister. He was in college and I was the bartender. I could see then that he was a giant talent with irrepressible charisma, and ambition that was going to take him as far as he wanted to go in the music business!”

These comments echo my feelings for Paul Keller. Not only with the PKO – Paul Keller Orchestra – but with his nationally respected record label, PKO Records, Paul has done much to keep Ann Arbor in the top tier of American jazz communities. Educator meets entrepreneur meets entertainer meets humanitarian in Paul Keller. May the Paul Keller Orchestra swing into a Golden Anniversary! For sure, they’ll swing at the Zal Gaz Grotto tonight. 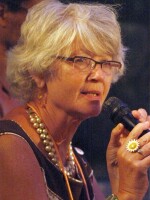