in the Ann Arbor Holiday Inn (Plymouth Rd. and US 23) Also see Marc Taras Interview with Dr. Alberto Nacif below.

WEMU and Sesi Motors  present the 5:01 First Friday Series dedicated to the memory of the late Dr. Jan Winkelman.

Catching Up With Alberto Nacif

Alberto Nacif is, as I like to say on the air, a physician, conguero and world-class human being. He has toured and performed with the legendary pianist Frank Emilio Flynn. He is the co-leader of Tumbao Bravo, along with sax and flute cat Paul VornHagen. He has also been working with his own band! They will be our musical guests at the Sesi Motors 5:01 Jazz show at Guy Hollerin's this Friday Oct. 5 at 5:01pm sharp! I had the chance to catch up with Al last week when he paid me a visit at the record store along with Cuban percussion master Jose "Pepe" Espinosa (and Pepe's lovely and happily pregnant wife Reina, carrying a little princess who will be with us soon!). We had a chance to preview a rough mix demo of the new band's forthcoming CD, tentatively titled "Elemental" and slated for release in January. The name of the band is still in the works...stay tuned.

In the few minutes it took me to clear the decks for talking, Alberto had chosen a rare sides collection from Edith Piaf on DRG, and two anthologies -- "Vocal India 2" and "Cuban Romance." He also took the exquisite set of Tchaikovsky ballet suites with Ernest Ansermet conducting the Suisse Romande that I was playing when they came in the door. "Hey! I always find something...you guys have great stuff," he added kindly.

Alberto was born in Oaxaca, Mexico. He started playing drums at 12 or 13, explaining that there is "...a lot of Afro-Cuban influence in the south of Mexico." His own early influences include Mongo Santamaria, Armando Peraza, Carlos "Patato" Valdez and Tata Guines.

The forthcoming new CD "Elemental" features 8 new original tunes by Al, with one credited to his son Alex. The band includes Alberto on congas, Pepe on bongos, timbales and percussion, pianist Wesley Reynoso, trumpeter Paul Finkbeiner, Russ Miller on sax and flute, trombonist Chris Smith and bassist Patrick Prouty. The CD also feature guest stars Javier Barrios on timbales and Paul VornHagen. I asked how he put the band together and he said, "I have good friendships with all these people, though I just met Chris Smith recently." They sound like old friends, too! "The tunes come from personal experiences...places I've been, things that happened..." When I asked about the arrangements he laughed and said, "The arrangements just come out of my head..."

Al is bringing Wesley in from NYC and Pepe lives here now, so the working band at Guy Hollerin's will have all the principal players from the CD except trombonist Smith. My impression from the CD and the recent Kerrytown Concert House show I saw is that the band may have an even deeper Cuban vibe than Tumbao Bravo! Al explained, "I like Cuban music because it's very organic -- very natural with inherent happiness and inherent bittersweet qualities -- relaxed." As to the extraordinary playing and amazing production on the CD, "I wanted it to sound like the classic Cuban recordings of the '40s! I had a great co-producer (Pepe Espinosa) and a great engineer in Geoff Michaels at Big Sky!" The resultant sound is warm, vibrant and thrilling!

We will all be in for a real treat at the 5:01 Jazz event. Put your "big ears" on and remember to wear your dancing shoes. These cats really deliver the goods! See you there!

Friday, May 3; Robert Hurst & Friends,
personnel to be announced 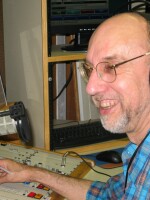 Marc Taras
How It HappenedMy parents enjoyed music. Mom used to sing to us as children and taught us the song as well. We had children's records. I remember being particularly enamored of an album of cowboy songs and a record whose songs taught lessons related to astronomy and space travel. Everybody liked the Beatles, but the record I pestered my parents about was the first album from the Kinks. They bought us a copy, and their reward was months of hearing me shout, "Oh, yeah!", as Ray and Dave churned through "You Really Got Me."
See stories by Marc Taras