Cathy Shafran: You are listening to 89 one WEMU FM. I am Cathy Shafran, and this is On the Ground Ypsi. It's a program intended to bring you the stories of the Ypsilanti community. We bring you On the Ground Ypsi, in partnership with the reporting team at Concentrate Media. And today, our focus is on some EMU research into jellyfish--jellyfish that are living here in the state in freshwater. Today, I'm joined by Concentrate Media reporter Rylee Barnsdale, whose online news site is reporting on this week on this interesting phenomenon and also on the local professor and students who are bringing it to our attention. Rylee, thanks so much for joining us.

Rylee Barnsdale: Thanks for having me.

Cathy Shafran: So, can you tell me a little bit more about what we're learning in the Concentrate Media article?

Rylee Barnsdale: So, this article is coming from our On the Ground project manager, Sarah Rigg, And it is all about this new course that's being offered at EMU this coming semester that is all about these freshwater jellyfish. And it's including students researching these organisms, as well as developing research questions, reviewing literature, and proposing projects to study these jellyfish for future semesters.

Cathy Shafran: You know, when you were reading about it, is your first thought, "Ooh, jellyfish?"

Rylee Barnsdale: I had no idea that freshwater jellyfish existed.

Cathy Shafran: And so, for you, it was an interesting read.

Cathy Shafran: All right. In the report in Concentrate media this week, Sarah Rigg talked extensively with EMU professor of biology Cara Shillington, and one of Cara's grad students, Rachel Koski. And both are joining us now. Cara and Rachel, thanks so much for joining us.

Cara Shillington: Thanks for inviting us.

Cathy Shafran: Actually, Cara, it's interested. You have a biology course at EMU dedicated just to this study. How did that come about?

Cara Shillington: I guess, mostly after COVID, I just wanted more opportunities to get students out in the field. I am a field biologist, and I really love the invertebrates. I teach also invertebrate classes. And I knew about these jellyfish and just thought this would be a great way to get students out and actually working as scientists. So, you know, coming up with their own ideas, getting them out there, so that they can see the organism and then coming up with their own ideas of where they wanted to go with the organisms and what we could study and things along those lines. So, it was really fun just to be out with a whole bunch of students and see the ideas and their excitement working with these organisms.

Cathy Shafran: As we hear you speak, we hear an accent. I understand it's from South Africa.

Cathy Shafran: I'm curious if that's where your interest in jellyfish began.

Cara Shillington: Actually, no. Well, I've always loved animals. And, you know, growing up, if you like animals, typically, people say, "Well, you should study to be a vet." And so, I did think that, at some point, I was going to to be a vet, and I came over to the States for college and just got into tarantulas somehow. And so, actually that is my area of expertise, as I am actually a terrestrial ecologist and work with tarantulas. But my teaching has, you know...I teach a natural history of invertebrates class, which means that I'm out looking at a lot of these invertebrates, which I will point out, 96% of the animal kingdom are the invertebrates. And so, people need to see these. And getting students excited about the invertebrates is really important to me. And for some reason, it was just really easy with the jellyfish. I had, you know, a good number of students that were really excited and just really enjoyed being out and in the water with them and also looking at them in the lab.

Cathy Shafran: Can you paint a word picture for our audience that are listening? We talk jellyfish, and most of us imagine these very large, squishy movie kind of things that we see in the ocean area. When we talk about freshwater jellyfish, what should we be imagining?

Cara Shillington: So, these ones...so, again, not to say that those in the ocean are not small because you get the wide variety anyway you go. But the ones that we are seeing here, they are, you know, about the size of a penny, not very big. They have really small, little tentacles just around the bell. They are fairly transparent. And they have, when you look at them from the top, they have almost like a white cross. And really what you seeing is just their guts and reproductive organs. And that is really, when you see them in the water, that is the easiest thing to spot is kind of this little white cross round organism floating past. So, you can see them, and you don't have to be in the water to see them. If you're on boats, you can also see them. I had one of my students was on a kayak the whole time for the project, and she was able to see them in the kayak. So. The more they are, the easier it is to to see. But they are, if you know to look, you can typically find them if you're out at the right time.

Cathy Shafran: And what are you teaching your students? What do you hope they learn from this course?

Cara Shillington: You know, these are scientists. And so, I want, you know, part of what we do in science is learn to ask questions and then how we address questions. How do we collect data? How do we present this data? And, you know, build off once we have this, using the literature. So, they started off with, you know, what do we know about the freshwater jellies? What types of projects have been done with them? And then, you know, that was our starting point. So then, what type of questions can we ask? I like to just see what are the animals doing in their environment? You know what? How do different environmental factors impact them? You know, when you see numbers together, are they interacting? Are there any type of social interactions? But, you know, also thinking about the ecological side, you know, these are a non-native species. You know, how are they interacting with native species? Do they have any impacts? You know, how are things changing long term with climate change, which is, you know, clearly happening. How is that impacting not only them but also the other organisms in their ecosystem?

Cathy Shafran: You are listening to On the Ground Ypsi on 89 one WEMU. We're also joined by one of Cara's grad students, Rachel Koski. Rachel, just curious. What attracted you to doing research along these lines?

Rachel Koski: So, I've always really enjoyed marine biology. I took a course in high school that really piqued my interest. While at EMU, I was taking marine classes, the invertebrate class that Dr. Shillington had mentioned, where we did talk about the freshwater jellyfish. And then, I was getting my SCUBA certification for the invertebrate class, and I saw them in real life. And I was like, "Oh my gosh! These are just the coolest, neatest things ever." And now, I get to work with them. So, it's really cool.

Cathy Shafran: I know the question that everybody is thinking. They think jellyfish, they think stinging, and they hurt you. They're dangerous. When you see the jellyfish, these freshwater jellyfish, do they have the same danger? Are they cute? And can you hold them? How do you look at them?

Rachel Koski: I would say you probably shouldn't hold them. They're super fragile. As far as stinging goes, they do have stinging cells called nematocysts that are used for prey capture, but they can do no harm to us. Our skin is too thick for the nematocysts to penetrate.

Cathy Shafran: Our On the Ground Ypsi conversation about jellyfish found in freshwater continues on 89 one WEMU. Do you see a time where people become so much more well-versed in the freshwater jellyfish that they start trying to bring them into their home aquariums?

Cara Shillington: There's a lot to deal with the life cycle of these. They're very difficult to keep. Jellyfish, in general, are very difficult to keep in aquaria, whether you're talking freshwater or the marine ones. There are now aquariums specifically set up to maintain jellyfish in, you know, in home situations. Obviously, in the big national aquaria, people have been very successful with this for many years, but they are very fragile. And, you know, finding the right amount of food for them and things along those lines, I think it's, especially for these ones, I think it's going to be a long time before people are really able to keep them successfully. And Rachel, again, has been the one, along with the students in the class, have been the ones that have been doing most of the care. And it has been difficult.

Cathy Shafran: If somebody wanted to go then and get a glimpse of them somewhere in Michigan, where's the best place to go and how do you find them?

Cara Shillington: Typically, you're looking for deeper, clearer lakes is where they tend to be found. Usually, in August, September is when they are most common, One of the things, you know, check out our website. So, we do have a website about the jellies. And, you know, next semester, when we start the class again and are going out, we'll be posting some information. And if you have a lake that you go to regularly, and if there are people that swim in that lake, ask them, because people that typically are in the lakes a lot, they know.

Cathy Shafran: And last question. What's ahead for your research?

Cara Shillington: So, Rachel, this is where we go. Yeah. So, for me, as I said, you know, my research, a lot of my research, is with the tarantulas. And so, I am just so excited to be working with Rachel and moving into a new area of research for me. And she really is. And, also, I've got a couple of undergraduates that will be working with me as well. And, you know, they are the ones leading where we're going with the research with what they're interested in.

Cathy Shafran: And, Rachel, what's ahead for your research?

Rachel Koski: Yeah. So, I think, this past year, I was really focused on trying to keep them alive in the lab, what our possibilities are, reading the literature. So, I think, next year, the goal is to go out as early as I can and track their abundance and distribution at a Southeast Michigan lake throughout their entire season, so early August-ish to late September, hopefully, early October, and just getting a better understanding of when their blooming and their distribution within the lake.

Cathy Shafran: Okay, great. Concentrate Media reporter Rylee Barnsdale and EMU Professor of Biology Cara Shillington and grad student Rachel Koski. I want to thank all of you so much for joining us today for On the Ground Ypsi.

Rylee Barnsdale: Thanks so much, Cathy. 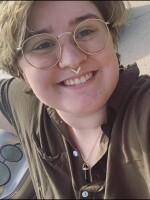