A bright, sunny day brought some bright, sunny music to WEMU!  This week on The Roots Music Project, host Jeremy Baldwin welcomed singer/songwriter Danny Kroha to the WEMU studios for a live interview and performance.

Danny Kroha is most famous for his work with The Gories, as well as Danny & The Darleans and Danny & The Doll Rods.  All of these projects had blues and roots influences, but in 2015, Third Man Records released Danny's Folk, Blues and Gospel album, "Angels Watching Over Me."  The albums features 16 Public Domain compositions played on guitar, banjo, dulcimer, diddley bow, washtub bass, and jug.

For more info on Mr. Kroha's career, check out his website. 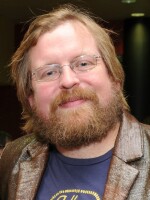