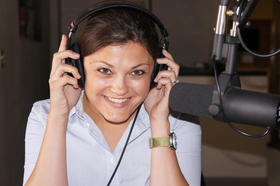 Before becoming the newest Capitol reporter for the Michigan Public Radio Network, Cheyna Roth was an attorney. She spent her days fighting it out in court as an assistant prosecuting attorney for Ionia County. Eventually, Cheyna took her investigative and interview skills and moved on to journalism. She got her masters at Michigan State University and was a documentary filmmaker, podcaster, and freelance writer before finding her home with NPR.
Very soon after joining MPRN, Cheyna started covering the 2016 presidential election, chasing after Donald Trump, Hillary Clinton, and all their surrogates as they duked it out for Michigan. Cheyna also focuses on the Legislature and criminal justice issues for MPRN.
Cheyna is obsessively curious, a passionate storyteller, and an occasional backpacker.
Follow her on Twitter at @Cheyna_R

Some Republicans in the state House want to limit the governor’s ability to move money around within state budgets.  They passed a bill out of a state House committee Wednesday.  Cheyna Roth has more.

Listen
Listening...
/
0:39
Cheyna Roth reports on legislation that would limit the governor's ability to move money around in the Michigan state budget.

Lying to your landlord about needing an emotional support animal could become a crime in the state.  As Cheyna Roth reports, bills in the state House would make it a misdemeanor.

Whitmer Signs Budgets – With Liberal Use Of Line Item Veto

Abortion has moved to the forefront of national politics.  Where lawmakers stand on the issue has become a litmus test when determining if someone is a Republican or Democrat.  But it hasn’t always been this way.  As part of a joint project with the Michigan Campaign Finance Network, Cheyna Roth reports, the political shift started around 1980...

Fighting counterfeit airbags is on the agenda for a bipartisan pair of lawmakers in Lansing.  Cheyna Roth reports.

A lawmaker in Lansing wants to make it mandatory for people working in certain professions to report suspected animal abuse and neglect.  Cheyna Roth has more.

Michigan residents could get a break on their back to school shopping.  As Cheyna Roth reports, recently introduced bills would create a back to school spending holiday.

Listen
Listening...
/
0:32
Cheyna Roth reports on the proposal of a back to school shopping holiday in Michigan.

US Department Will Oversee “Systemic Changes” At MSU For Three Years

Michigan State University has agreed to three years of federal oversight.  As Cheyna Roth reports, the US Department of Health and Human Services on Monday announced a resolution to a civil rights investigation.

Listen
Listening...
/
0:42
Cheyna Roth reports on MSU agreeing to three years of federal oversight in the wake of the Larry Nassar scandal.

A new bill in the state Legislature would ban the manufacturing and sale of personal care products with microbeads.  But, as Cheyna Roth reports, the small plastic beads are already banned in some products at the federal level.

Listen
Listening...
/
0:32
Cheyna Roth reports on legislation that would ban the production and sale of microbeads in Michigan.

The Michigan Court of Appeals has cleared up some uncertainty about the state’s spending requirements for local governments.  Cheyna Roth has more.

The Michigan Supreme Court heard arguments on whether it was legal for the state Legislature to adopt citizen-led ballot initiatives last year…and then quickly change them.  Cheyna Roth was in court for the proceedings.

Lawyers from the state Attorney General’s Office will be in front of the Michigan Supreme Court today.  The twist?  They’ll be arguing both sides of the same issue.  Cheyna Roth explains.

Listen
Listening...
/
0:41
Cheyna Roth reports on the Michigan Attorney General's office preparing to argue both sides of a ballot issue before the state Supreme Court.

How Did We Get Here? A Refresher On What’s Happening At The Michigan Supreme Court This Week

This week, the Michigan Supreme Court will hear arguments on a debate that started during a contentious and busy lame duck session last year.  Whether or not the state’s highest court will actually step in with a ruling remains to be seen.

As Cheyna Roth reports, the battle is over whether it was okay for the Republican-led Legislature to adopt and then quickly amend minimum wage and paid sick leave ballot initiatives.

The Michigan Supreme Court says the state’s tribal governments do not fall under a constitutional provision that can prevent some people from running for office.  Cheyna Roth has more.

Listen
Listening...
/
0:38
Cheyna Roth reports on the Michigan Supreme Court's ruling that tribal government elections are not part of the state constitution.

Michigan schools will finalize their budgets today but without knowing how much money they’ll have to work with.  Cheyna Roth reports.

Anti-abortion groups will soon be on sidewalks and at events around the state, asking voters to support measures that would restrict abortion in Michigan.  There are two groups trying to get enough signatures for their ballot initiatives.

Cheyna Roth breaks down the measures and how Michigan could effectively outlaw abortion in the near future.

Listen
Listening...
/
0:43
Cheyna Roth reports on the verdict of the William Strampel trial.

Jury Deliberations To Start Today In Trial Of Ex-MSU Dean

A jury is expected to begin deliberations today in the trial of former Michigan State University Dean William Strampel.  As Cheyna Roth explains, Strampel is accused of two felonies and two misdemeanors.

MDOC Raise Concerns Over House Version Of Its Budget

The state department in charge of Michigan’s prisons is not happy with a proposed spending plan in the state Legislature.  Cheyna Roth has more.

Listen
Listening...
/
0:34
Cheyna Roth reports on concerns over a proposed budget for the MDOC.

A new idea to raise money to fix the state’s roads involves selling state assets to pay for the infrastructure.  As Cheyna Roth reports, the assets include the Blue Water Bridge.

The Republican leadership in the state House and Senate has filed a challenge to a recent opinion by Democratic Attorney General Dana Nessel.

Opening statements and first witnesses were called yesterday in the criminal trial of the former dean of the College of Osteopathic Medicine at Michigan State University.  Cheyna Roth was in the courtroom for the case of The People versus William Strampel.

A lawmaker in Michigan wants to start a task force aimed at helping curb the state’s lead problem.  The task force would not just be focused on lead in the water.

A federal judge says Michigan has to hold a special election in 2020 for certain state Senate districts.  And the Legislature and governor have to come up with new political lines for the US House, state Senate, and state House districts by August.

A federal panel of judges says the district lines were originally drawn in favor of Republicans.

More money could be added to the state’s wrongful conviction fund.  Lawmakers on Thursday sent a bill to add $10 million to the fund to the governor’s desk.

A federal court in Michigan says that the state's Republican-controlled legislature unfairly drew some of Michigan's state legislative and U.S. House district lines and that a divided government will have to come up with new boundaries.

Governor Gretchen Whitmer’s plan to fix the state’s roads in a single budget is getting pushback.  The head of the Republicans in the Senate has his own ideas for how to handle a new roads policy.

Simon Back In Court For Second Day Of Critical Hearing

Former Michigan State University president Lou Anna Simon was in court today and will return to continue the hearing today.  A judge is deciding whether Simon should stand trial for charges that she lied to law enforcement.