Cinema Chat: 'Salvatore: Shoemaker of Dreams,' 'Blue Note Records: Beyond the Note,' 'To Leslie,' and more

"Salvatore: Shoemaker of Dreams" — OPENS FRIDAY, DECEMBER 2 AT THE STATE FOR LIMITED SCREENINGS

From director Luca Guadagnino ("Call Me by Your Name", "Bones and All"), the documentary explores the life of Italian shoemaker Salvatore Ferragamo, who created shoes for Hollywood stars during the silent film era and for iconic films of the period.

"Bardo, False Chronicle of a Handful of Truths" — OPENS TUESDAY, DECEMBER 6 AT THE MICHIGAN

The latest from Alejandro González Iñárritu, the Oscar nominated director of "Birdman or (The Unexpected Virtue of Ignorance)" and "The Revenant".

A renowned Mexican journalist and documentary filmmaker returns home and works through an existential crisis as he grapples with his identity, familial relationships and the folly of his memories.

An elite team of mercenaries breaks into a family compound on Christmas Eve, taking everyone hostage inside. However, they aren't prepared for a surprise combatant: Santa Claus is on the grounds, and he's about to show why this Nick is no saint.

"Top Gun: Maverick" — RETURNING TO THE MULTIPLEX FRIDAY, DECEMBER 2 FOR THE HOLIDAYS!!!

After thirty years, Maverick is still pushing the envelope as a top naval aviator but must confront ghosts of his past when he leads Top Gun's elite graduates on a mission that demands the ultimate sacrifice from those chosen to fly it.

A dark farce about a Korean man who is sentenced to death by hanging but survives the execution. And so, for the following two hours, his executioners try to work out how to handle the situation.

Part of the Late Night at the State Series

A gothic Christmas tale made the way only Tim Burton knows how, celebrating its 30th anniversary this year. Burton’s follow-up to the 1989 "Batman" starring Michael Keaton as the Caped Crusader with Danny DeVito as The Penguin and Michelle Pfeiffer as Catwoman.

"To Leslie" — PLAYS SUNDAY, DECEMBER 4 AT 5 PM AT THE MICHIGAN

With director Michael Morris in attendance for a post-film discussion and Q&A!

Inspired by true events, the film is about a West Texas single mother who wins the lottery and squanders it just as fast, leaving behind a world of heartbreak. Years later, with her charm running out and nowhere to go, she fights to rebuild her life and find redemption. Starring Andrea Riseborough, Allison Janney, and Marc Maron, among others

"Blue Note Records: Beyond the Note" — PLAYS TUESDAY, DECEMBER 6 AT 7:30 PM AT THE MICHIGAN

A revelatory, thrilling and emotional journey behind the scenes of Blue Note Records, the pioneering label that gave voice to some of the finest jazz artists of the 20th and 21st centuries.

Holiday Classics at the Michigan Theater (Tickets are free on Sundays!!!!)

A 2022 American coming-of-age drama film directed by Steven Spielberg and written and produced by Tony Kushner and Spielberg. It is a semi-autobiographical story loosely based on Spielberg's adolescence and first years as a director, told through an original story of the fictional Sammy Fabelman, a young aspiring filmmaker who explores how the power of movies can help him see the truth about his dysfunctional family and those around him. The film features an ensemble cast that includes Gabriel LaBelle, Michelle Williams, Paul Dano, Seth Rogen, and Judd Hirsch. It is dedicated to the memories of Spielberg's real-life parents Arnold Spielberg and Leah Adler. The film had its world premiere at the Toronto International Film Festival on September 10, 2022, where it won the People's Choice Award.

Young Sammy Fabelman falls in love with movies after his parents take him to see "The Greatest Show on Earth." Armed with a camera, Sammy starts to make his own films at home, much to the delight of his supportive mother.

Two-time Academy Award® nominee Carey Mulligan ("Promising Young Woman," "An Education") and Zoe Kazan ("The Plot Against America" limited series, "The Big Sick") star as New York Times reporters Megan Twohey and Jodi Kantor, who together broke one of the most important stories in a generation--a story that helped propel the #Metoo movement, shattered decades of silence around the subject of sexual assault in Hollywood and altered American culture forever.

Young couple Margot and Tyler (Anya Taylor-Joy and Nicholas Hoult) travel to a remote island to eat at Hawthorne, an exclusive restaurant run by celebrity chef Julian Slowik (Ralph Fiennes), who has prepared a lavish molecular gastronomy menu where food is treated as conceptual art, although his approach to cuisine has some shocking surprises for the wealthy guests.

A 2022 American superhero film based on the Marvel Comics character Black Panther. Produced by Marvel Studios and distributed by Walt Disney Studios Motion Pictures, it is the sequel to "Black Panther" (2018) and the 30th film in the Marvel Cinematic Universe (MCU). The film is directed by Ryan Coogler, who co-wrote the screenplay with Joe Robert Cole, and stars Letitia Wright, Lupita Nyong'o, Danai Gurira, Winston Duke, Dominique Thorne, Florence Kasumba, Michaela Coel, Tenoch Huerta, Martin Freeman, and Angela Bassett. In the film, the leaders of Wakanda fight to protect their nation in the wake of King T'Challa's death.

Ideas for a sequel began after the release of Black Panther in February 2018. Coogler negotiated to return as director in the following months, and Marvel Studios officially confirmed the sequel's development in mid-2019. Plans for the film changed in August 2020 when "Black Panther" star Chadwick Boseman died from colon cancer, with Marvel choosing not to recast his role of T'Challa.

The film received positive reviews from critics, who praised its emotional weight, tribute to Boseman, and the cast's performances. In Marvel Studios' "Black Panther: Wakanda Forever," Queen Ramonda (Angela Bassett), Shuri (Letitia Wright), M'Baku (Winston Duke), Okoye (Danai Gurira) and the Dora Milaje (including Florence Kasumba) fight to protect their nation from intervening world powers in the wake of King T'Challa's death. As the Wakandans strive to embrace their next chapter, the heroes must band together with the help of War Dog Nakia (Lupita Nyong'o) and Everett Ross (Martin Freeman) and forge a new path for the kingdom of Wakanda.

"The Banshees of Inisherin"

This is a 2022 black comedy film written and directed by Martin McDonagh. The film follows lifelong friends (Colin Farrell and Brendan Gleeson) who find themselves at an impasse when one abruptly ends their relationship; Kerry Condon and Barry Keoghan also star. It reunites Farrell and Gleeson, who previously worked together on McDonagh's directorial "In Bruges" (2008). It had its world premiere at the 79th Venice International Film Festival, where Farrell won the Volpi Cup for Best Actor and McDonagh won the Golden Osella for Best Screenplay.

Set on a remote island off the west coast of Ireland, this film follows lifelong friends Pádraic and Colm, who find themselves at an impasse when Colm unexpectedly puts an end to their friendship. A stunned Pádraic, aided by his sister Siobhán and troubled young islander Dominic, endeavors to repair the relationship, refusing to take no for an answer. But Pádraic's repeated efforts only strengthen his former friend’s resolve and when Colm delivers a desperate ultimatum, events swiftly escalate, with shocking consequences.

From writer-producer-director Todd Field comes this film starring Cate Blanchett as Lydia Tár, the groundbreaking conductor of a major German Orchestra. We meet Tár at the height of her career, as she's preparing both a book launch and much-anticipated live performance of Mahler's Fifth Symphony. Over the ensuing weeks her life begins to unravel in a singularly modern way. The result is a searing examination of power, and its impact and durability in today's society.

Non-commercial, fact based reporting is made possible by your financial support.  Make your donation to WEMU today to keep your community NPR station thriving.Like 89.1 WEMU on Facebook and follow us on Twitter 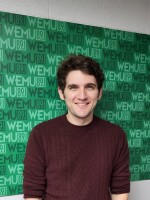