creative:impact - There are no wallflowers here!

Bruce Sagan has been playing folk music from Scandinavia and the Balkans for over 40 years. He makes regular trips to Europe to work with musicians there and is much sought after as a teacher and performer throughout the US on fiddle, nyckelharpa (Swedish key fiddle), and gudulka (Bulgarian rebec).

His four albums have found critical acclaim on both sides of the Atlantic.

Bruce has been music director for various events and was a co-founder of the Nordic Fiddles and Feet Camp (formerly Scandinavian Week at Buffalo Gap).

Together with Nan Nelson and Chris Rietz, Bruce is a member of the trio Veselba, which means ''merriment'' in Bulgarian. He also plays as part of a Scandinavian fiddling duo with Brad Battey and leads bimonthly Scandinavian jams both locally in Ann Arbor and virtually.

Deb Polich: Welcome to creative:impact on 89 one WEMU. I'm Deb Polich, president and CEO of Creative Washtenaw and your creative:impact host. Thanks for tuning in on Tuesdays to hear our conversations with creative guests rooted in Washtenaw County as we explore their businesses, products, programs, and services and how they impact and add to our local quality of life, place, and economy. You know, when my daughter Lindsay graduated from the University of Edinburgh's Veterinary School, a dinner was held for the graduates in the families. Of course, the guests knew mostly their graduates, but hardly anybody else. And, you know, Russ and I expected the room would empty of family members pretty much immediately after the dinner, so the graduates could continue to celebrate. We were surprised instead when a band took the stage and announced it was time to start the ceilidh dancing. With a little help from Scott at the next table, we learned that Ceilidh was a traditional Scottish dance. The band announcer assured us that they would give us step-by-step instructions, you know, somewhat like a square dance caller. And soon, the room was rocking, and the movement, music, and laughter was filling every space. It was so much fun. And it's an experience that we will always remember. Bruce Sagan regularly delights in the joys of traditional dance and music. He is the president of the Ann Arbor Community for Traditional Music and Dance. Bruce, welcome to creative:impact.

Bruce Sagan: Well, thank you so much, Deb. It's a real pleasure to be here.

Deb Polich: Yes. You know, that really was a pretty important experience. And you get to do that regularly at your organization. Again, I mentioned the Ann Arbor Community for Traditional Music and dance, but it has an acronym. Can you pronounce the acronym?

Bruce Sagan: Yes. It has, maybe, a little bit of an unfortunate pronunciation. It's AACTMAD ("act mad"), but we don't want people to act mad. We want them to have fun. Thanks for having me at that ceilidh.

Deb Polich: Right. Right. I took it as kind of a, you know, that AACTMAD describes playfulness and fun and all the fun you all have. So, I'm going to take it back.

Bruce Sagan: Yeah, yeah. That's a great interpretation. I'm going to use that.

Deb Polich: How do you define traditional music and dance, and what do you include under that umbrella?

Bruce Sagan: It's very broad--almost anything that there are people doing where it's not a formal sort of thing where you, you know, have to do exactly with these steps or whatever. This is traditional dance. So, in particular, AACTMAD supports contras, which are kind of like square dances but done in lines. We support English country dancing, which is close to the ceilidh that you were just talking about. We support swing dancing, which comes from the jazz music of the 1920s and 1940s, a certain type of dancing called fusion, which kind of blends together many different styles, Morris dancing, which is a type of English traditional dancing. We have an open band called the Pittsfield Open Band because it meets at the Pittsfield Grange. And anybody can join it. That's what the open is. Our real focus in this group is on inclusion. We want people to get together, to have fun together, to form a community. It's very important. The community in our title is really important to us.

Deb Polich: And you listen to a lot of different dances. You have to really know how to do them, or can you learn as you go?

Bruce Sagan: You can learn as you go. So, for example, for the swing dancing, the first hour or so, our swing dances are on Friday nights, and the first hour is a lesson. So, they introduce you to--

Bruce Sagan: The basic moves. And then it's followed by a two-hour session of open dancing. So, for swing dancing they don't use...many of our dances are to live music. Swing dancing is traditionally done with deejays spinning discs. So then, we'll have 2 hours of an open dance session.

Deb Polich: I'm suspecting a few people are remembering those days in gym class when they had to learn how to dance. And, you know, that anxiety of being paired up with a partner and then getting on the floor. And, in truth, I was always tall, and there were never enough boys in my class. So, I always had to lead.

Deb Polich: And, to this day, I tend to lead. But tell us about your earliest dance experiences. How did you get into this?

Bruce Sagan: Yeah, so, actually it was through a dancing class, but I had a much better experience than you did. So, what happened was I was in college, and my then-girlfriend and I wanted to take a class together. But she was in political science, I was in mathematics. So, that ruled out things in our specialty. So, she looked through the catalog and she said, "Oh, there's a folk dance class being offered. I had a folk dance class when I was in high school. I enjoyed it." But the only one that would fit both of our schedules was the intermediate level class.

Bruce Sagan: And I said, "I have two left feet. I can't do this." But she was really persistent. She dragged me to the first day of class, and I just fell in love with the dancing and, in particular, with the community that I could see was being built from the dance. And so, I toughed it out. And as they said, the rest is history.

Deb Polich: So, dance has stayed in your life. How about the girl?

Bruce Sagan: No. We went our separate ways. Though, my current wife, we met because I was giving a dance workshop which she attended.

Deb Polich:That's cool. 89 one WEMU's creative:impact continues. I'm Deb Polich, and my guest is Bruce Sagan from the Ann Arbor Community for Traditional Music and Dance. So, you are, in addition to being a musician and a dancer, you're a mathematician with a Ph.D. from MIT. Very impressive. And I'm curious. What would you say if any connection exists among the three: math, music and dance?

Bruce Sagan: Yeah, there's a great connection there. So, you're probably aware that there are a number of scientists who are also known as musicians--Einstein, perhaps, being the most famous example. He played the violin. For me, there's information flowing in all directions. So, for example, one of the dance forms that I am most interested in is dance from Bulgaria, and the dances from Bulgaria are all these odd rhythms, like five and seven, 11, 13--non-Western rhythms. But for me, as a mathematician, actually, it's not that hard for me to think in those rhythms just because, you know, it's a matter of breaking down. What you do is you break down each of the rhythms into smaller bits: twos and threes. And so, that comes very naturally in terms of the music. One of the other traditions that I'm very heavily involved in is Swedish folk music, and they're in current practice, often what you get is two musicians playing together, one of whom is playing the melody, and one of whom is playing a harmony. And the melody is fixed, but the harmony is supposed to be improvised, which is why I love this. One of the reasons I love this tradition. And it's very hard to improvise on the spot, unless, you know, some music theory. And then, you can improvise using the chordal structure of the tune. And there's many fewer chordal structures than there are tunes. So, my ability to think mathematically translates into knowing what I need to know about the music theory in order to come up with improvisation.

Deb Polich: So, that obviously makes a huge difference for you. And then, many of us that don't even realize it. We're using math as we're doing dance or listening to music, too.

Deb Polich: It's kind of innate.

Deb Polich: I believe that there was a long--in the United States--the traditional dance was something that most cultures brought with them and also continued as they socialized. I've got two minutes to ask this question. But, you know, that tradition started to wane here in the States and around the 20th century. Do you think it could or should be resurrected?

Bruce Sagan: There has been a massive renaissance of dancing. So, for example, the contra dancing that I mentioned.

Deb Polich: This is dancing that has its roots in 17th century dances from U.K. and from France. And you can go to a contra dance nowadays, and there can be over a hundred people there. So, there's definitely been a resurrection of these dances and interest in them. So, yeah.

Deb Polich: Well, I want to tell you that you've encouraged me to get my dancing shoes out, and I hope to visit AACTMAD soon. And it's been a real pleasure to have you on the show, Bruce.

Bruce Sagan: Oh, it's just been wonderful. Thanks so much again for the invitation.

Deb Polich: You're so welcome. This is WEMU's creative:impact. And that was Bruce Sagan. And he is part of the Ann Arbor Community for Traditional Dance and Music. Check out the organization, Bruce, and more at WEMU dot org. This is creative:impact. I'm Deb Polich, president and CEO of Creative Washtenaw and your host. Mat Hopson is our producer. Please join us next Tuesday when we welcome another creative Washtenaw guest. Celebrating 45 years of jazz broadcasting, this is 89 one WEMU Ypsilanti. Public radio from Eastern Michigan University. Online at WEMU dot org. 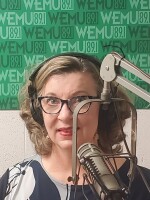