This week, "Art and Soul" focuses on the culinary arts.  WEMU’s Lisa Barry and Jessica Webster speak with Tammie Gilfoyle, a local artist, dog rescuer, and now known to some as the “tomato evangelist” because of the fresh vegetables she's growing in Dexter.

WEMU's Lisa Barry and Jessica Webster talk with Tammie Gilfoyle of Ann Arbor.  An artist, dog rescuer, and also a farmer, Tammie grows a number of vegetables on her farm in Dexter.

There are some who believe there is a story behind the food we eat.  Tammie says there are stories behind the seeds she plants to grow hundreds of tomatoes and peppers.  The name of her farm is "Tamchop Farm," based on a nickname she earned working a few years ago when she lived in California.  She's also known these days as the "tomato evangelist" because of her love of growing different varieties of tomatoes, which will be used for a number of upcoming local special dinners.

Her life partner, Zingerman's co-founder Ari Weinzweig, helped her coin the term "PFM," as in "Proud Farmer Moment," when her hard work pays off growing vegetables from seed in the spring to something being sold and served around Washtenaw County. 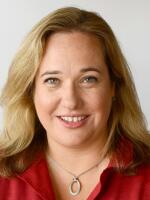